In this post I would like to cover the base of what is needed to know about the Cisco Fabric Extender that ships today as the Nexus 2000 series hardware.

The concept is easy to understand referencing existing knowledge. Everybody is familiar with the distributed switch architecture commonly called a modular switch: 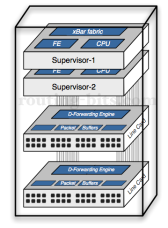 Most linecards nowadays have dedicated ASICs to make local hardware forwarding decisions, e.g., Catalyst 6500 DFCs (Distributed Forwarding Cards). Cisco took the concept of removing the linecards from the modular switch and boxing them with standalone enclosures. These linecards could then be installed in different locations connected back to the supervisors modules using standard Ethernet. These remote linecards are called Fabric Extenders (a.k.a. FEXs). Three really big benefits are gained by doing this.

Lets take a deeper look at how this is done.